Versions of the Text

Books in the Library 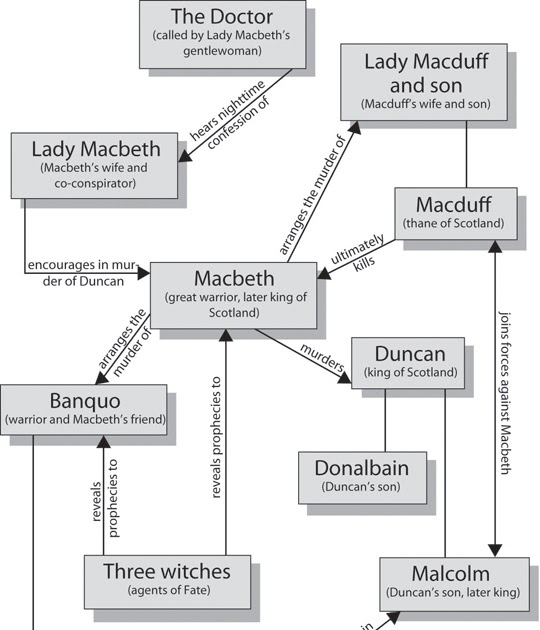 Macbeth’s greatest themes identify with guilt and remorse, ambition, fate, violence, nature/unnatural and manhood.  Symbols used throughout the play include visions and hallucinations, blood and sleep.

This following extract from GradeSaver talks about key points regarding Macbeth and Lady Macbeth’s guilt and highlights some important quotes that give clues to the audience of their true feelings of remorse.

Some of the most famous and poetic lines from Macbeth are expressions of remorse. “Will all great Neptune’s ocean wash this blood / Clean from my hand?” exclaims Macbeth after he stabs Duncan (II ii 58-59). Similarly, Lady Macbeth is plagued by a “spot” that she cannot remove from her hand: “Out, damned spot! Out, I say. . . What, will these hands ne’er be clean?” (V I 30-37). At first physical remainders of a regrettable crime, the royal blood leaves permanent marks on the psyche of the couple, forever staining them with guilt and remorse. The different ways in which the Macbeths cope with their crimes show how their characters develop: whereas Lady Macbeth is initially the one without scruples, urging Macbeth to take action, it is an overpowering sense of guilt and remorse that drives the Lady to her untimely death. Macbeth, on the other hand, seems to overcome the guilt that plagues him early on in the play.

While the following summary and analysis of themes and used in Macbeth are extracts from the Macbeth LitCharts website and can be viewed in full detail by clicking on the link provided.

Macbeth is a play about ambition run amok. Both Macbeth and Lady Macbeth want to be great and powerful, and sacrifice their morals to achieve that goal. By contrasting these two characters with others in the play, such as Banquo, Duncan, and Macduff, who also want to be great leaders but refuse to allow ambition to come before honor, Macbeth shows how naked ambition, freed from any sort of moral or social conscience, ultimately takes over every other characteristic of a person. Unchecked ambition, Macbeth suggests, can never be fulfilled, and therefore quickly grows into a monster that will destroy anyone who gives into it.

From the moment the weird sisters tell Macbeth and Banquo their prophecies, both the characters and the audience are forced to wonder about fate. Is it real? Is action necessary to make it come to pass, or will the prophecy come true no matter what one does? Different characters answer these questions in different ways at different times, and the final answers are ambiguous—as fate always is.  Unlike Banquo, Macbeth acts: he kills Duncan.

To call Macbeth a violent play is an understatement. It begins in battle, contains the murder of men, women, and children, and ends not just with a climactic siege but the suicide of Lady Macbeth and the beheading of its main character, Macbeth. In the process of all this bloodshed, Macbeth makes an important point about the nature of violence: every violent act, even those done for selfless reasons, seems to lead inevitably to the next.

Nature and the Unnatural

In medieval times, it was believed that the health of a country was directly related to the goodness and moral legitimacy of its king. If the King was good and just, then the nation would have good harvests and good weather. If there was political order, then there would be natural order. Macbeth shows this connection between the political and natural world: when Macbeth disrupts the social and political order by murdering Duncan and usurping the throne, nature goes haywire. Incredible storms rage, the earth tremors, animals go insane and eat each other. The unnatural events of the physical world emphasize the horror of Macbeth and Lady Macbeth’s acts, and mirrors the warping of their souls by ambition.

Also note the way that different characters talk about nature in the play. Duncan and Malcolm use nature metaphors when they speak of kingship—they see themselves as gardeners and want to make their realm grow and flower. In contrast, Macbeth and Lady Macbeth either try to hide from nature (wishing the stars would disappear) or to use nature to hide their cruel designs (being the serpent hiding beneath the innocent flower). The implication is that Macbeth and Lady Macbeth, once they’ve given themselves to the extreme selfishness of ambition, have themselves become unnatural.

Over and over again in Macbeth, characters discuss or debate about manhood: Lady Macbeth challenges Macbeth when he decides not to kill Duncan, Banquo refuses to join Macbeth in his plot, Lady Macduff questions Macduff’s decision to go to England, and on and on.

Through these challenges, Macbeth questions and examines manhood itself. Does a true man take what he wants no matter what it is, as Lady Macbeth believes? Or does a real man have the strength to restrain his desires, as Banquo believes? All of Macbeth can be seen as a struggle to answer this question about the nature and responsibilities of manhood.

The following is an extract detailing symbols used in Macbeth and are from the Macbeth LitCharts website and can be viewed in full detail by clicking on the link provided.

A number of times in Macbeth, Macbeth sees or hears strange things: the floating dagger, the voice that says he’s murdering sleep, and Banquo’s ghost. As Macbeth himself wonders about the dagger, are these sights and sounds supernatural visions or figments of his guilty imagination? The play contains no definitive answer, which is itself a kind of answer: they’re both.

Blood is always closely linked to violence, but over the course of Macbeth blood comes to symbolize something else: guilt. Death and killing happen in an instant, but blood remains, and stains.

When he murders Duncan, Macbeth thinks he hears a voice say “Macbeth does murder sleep” (2.2.34). Sleep symbolizes innocence, purity, and peace of mind, and in killing Duncan Macbeth actually does murder sleep: Lady Macbeth begins to sleepwalk, and Macbeth is haunted by his nightmares.